The other day, a friend asked me what I do for work. I explained that I work at an advertising agency and primarily deal with print advertising. Upon hearing this information, my friend was taken aback and seemed genuinely stunned to hear that print media was still in existence.

Surprisingly, this reaction is not uncommon.

These days, I hear a lot about digital this and digital that, and print media is often left out of the conversation. That’s because most people seem to forget that print is (despite popular belief) thriving.

Surprised? Don’t be. Here are seven reasons why print media is alive, well, and your best advertising bet.

Pick up a magazine and hold it in your hands. Feel its weight and its presence. Thumb the glossy paper, smell the ink and listen as the pages flip and turn.

Reading a magazine requires a much different mindset that searching online.

Now pull up your favorite website and look at the digital advertising covering the page. Can you feel it? What does it smell like? How do you perceive its presence? Yeah, it’s a lot different than print media.

Print media is unique in that it’s incredibly sensory. When you interact with print, you’re truly engaging with the content on a level that digital just can’t provide.

Take a look at the media kit for any magazine, and you will find a plethora of incredibly specific, targeted information.

Take the Men’s Fitness media kit, for example. After a quick glance, you’ll find that Men’s Fitness readers are tech-savvy, interested in fitness, big spenders and brand-conscious. That’s some pretty specific information. That’s also the kind of information that’s going to help your brand advertise to exactly the right audience.

With print media, you have the ability to direct your advertisements to highly targeted audiences. When you place an ad in a particular magazine, you know exactly who is going to see it. That means you won’t money advertising to people that aren’t interested. Print allows you to place your ads right in front of the people that are most likely to buy your product.

Have you ever stared at the computer or phone screen for so long that your eyes actually started to water and burn? Chances are you probably have, so you know how unenjoyable the feeling is.

But have you ever had that happen while reading a magazine? No, probably not. That’s because print media is far easier (and much more pleasurable) to read. We’re not the only ones that feel that way, either. A study conducted by Two Sides revealed that “88 percent of respondents indicated that they understood, retained or used information better when they read print on paper.” That’s because print media doesn’t require readers to scroll, move and read text at the same time; we just have to turn the page.

The survey also revealed that 81 percent of those surveyed found print media more relaxing to read and preferred reading print on paper versus print on an electronic device, if given the choice.

You’ve probably heard the saying, “don’t believe everything you read on the Internet” more than a few times. That’s because practically anyone can publish anything on the Internet.

On one hand, that freedom is great; it allows us to compile a vast amount of information online. On the other hand, it means that there’s a plethora of spam, viruses, and false advertising floating around on the Internet, as well.

With print media, however, all materials are reviewed, edited and scrutinized by numerous channels before anything is published. That means shoppers can rest assured any brand or product they see in a print publication has been verified and is legitimate. As an advertiser, you can have the best of both world by combining the credibility of print with the wide reach of digital in your next campaign.

Despite being a digital generation, millennials are actually one of the largest proponents of print.

In a recent survey by OmniPress, 89 percent of millennials said they “consume print for educational and professional content,” and a vast majority choose to consume at least part of their content in print. Another study conducted by JWT also revealed similar findings: eight out of 10 American adults would rather read magazines in hard copy than online.

It’s true millennials love their digital information, but they also have a strong affinity for anything nostalgic. Naturally, print media fits right in.

Magazines are more than just something to read; they’re a trip back in time, and they never disappear. 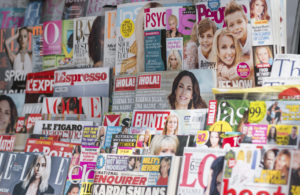 Running your advertisement in multiple publications will increase your chances of success.

Yes, the Internet has made it possible to go back in time and look up just about anything. However, looking at a vintage magazine cover on your smartphone just isn’t the same as holding something that was printed before you were born in your hands.

Print lasts forever, and people like to save it and look back at it years later. Digital is fleeting, and it comes and goes quickly. Refresh the page, and that banner ad across the top of the page is gone forever. Flip that page in the magazine, though, and the advertisement will always be there.

Believe it or not, print media is actually an extremely affordable way to break into advertising.

You may be under the impression that you need a multi-million dollar budget to run a print advertisement, but that’s just not the case. It certainly doesn’t hurt to have a hefty budget, but with only a few hundred dollars, you can begin advertising in some of the nation’s top publications. Working with an agency also dramatically reduces the cost of advertising, as your agency will likely be able to offer you lower rates than you’d receive working directly with the publications.

Additionally, booking packages or frequencies can further lower the cost while simultaneously increasing your reach and impressions.

Print media is far from dead. In fact, it’s probably your best bet for an advertising campaign. Print is sensory. It’s eternal. It’s loved by millennials, and it’s inexpensive and effective – what else could you possibly ask for?